Home > Blog > Businesses Are Making a Difference by Going 100% Renewable

Clean, renewable energy is for everyone. If you’re a Green Mountain customer, then you know clean energy helps power residential homes, but did you know that businesses are using it, too, and reducing their environmental impact?

In fact, many corporations are leading the way with policies that call for 100% renewable electricity. It’s become a corporate social responsibility pillar for many businesses. According to The Climate Group, customer, employee and shareholder demands, along with cost savings, are the main motivators for taking action. “Businesses have the power to shape markets and policies in favor of clean energy,” explains its site.

Since 1997, we’ve been on our own environmental mission—to change the way power is made—meaning “switch to clean, renewable electricity generated by wind and solar power.” We believe that taking care of the planet is the right thing to do.

With 64% of the electricity generated in the U.S. (in 2016) coming from coal and natural gas (renewables only made up 15%), we, as eco-conscious citizens, can and MUST do better.

Businesses that adopt a 100% renewable energy policy are making a positive impact on the environment. By choosing energy made from pollution-free sources, like wind and solar power, they are helping increase the demand for renewables, building a cleaner electricity grid and reducing greenhouse gas emissions.

Corporations that have set a goal to use 100% renewable energy by 2035 include Adobe and HP, and Johnson & Johnson, General Motors and Kellogg’s aim to reach the same goal by 2050.

Other companies have already hit the mark for 100% renewable energy. Estee Lauder reached its goal ahead of schedule, Microsoft has been using it since 2014, Apple is renewable across 43 countries, LEGO balances 100% of its energy use with energy from renewable sources, and Google has been renewable globally since 2017.

Target and Walmart have the same long-term goal of sourcing 100% renewable electricity for their operations (by 2030 and 2025, respectively), but both retailers are taking steps on-site to reduce their environmental impact.

Walmart aims to produce 7,000 GWh of renewable energy by the end of this year and offers electric vehicle chargers at 100 locations across 29 states.

What’s next for you?

To see if your favorite retailer or service provider is making the move to 100% renewable energy, check out The Climate Group’s RE100 list. It details what influential companies are committed to 100% renewable power.

Start making a difference for our planet by choosing 100% renewable electricity for your home or business.

We’re Committed to You 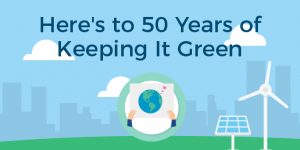 Here’s to 50 Years of Keeping It Green

Your Guide to Sustainability Projects Happening Around the World